Our 2017 survey of 1,500 U.S. consumers reveals a troubling trend for Google: 63% of shoppers claim to bypass the search engine when seeking products online. But the news is not better for most retailers. Of these “Google skippers,” nearly 79% say they go directly to Amazon’s website or app.

Just 13% of all survey respondents claimed to start their shopping journey on a website or app other than Google or Amazon. This leaves major e-commerce hopefuls like Walmart and Target competing for a vanishingly small sliver of consumer attention. 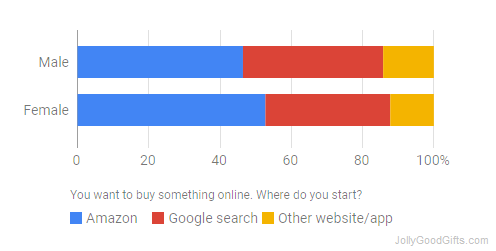 Methodology: The survey was conducted using an online panel of 1,501 USA-based consumers between June 25 and July 1, 2017. Respondents were asked “You want to buy something online. Where do you start?” and given three choices in randomized order: Google, Amazon or Other Website/App.

About JollyGoodGifts.com: We are a gift recommendation website focused on helping shoppers discover unique ideas for specific personalities, professions and more.