In our second annual survey of 1,550 US adults, we asked consumers where they start their online shopping journey: Google, Amazon, or another website/app.

Our survey results suggest shoppers aged 55+ are less likely to go to Amazon first, instead preferring a Google search or other websites/apps. 18-24 year-olds were the cohort least likely to use Google. 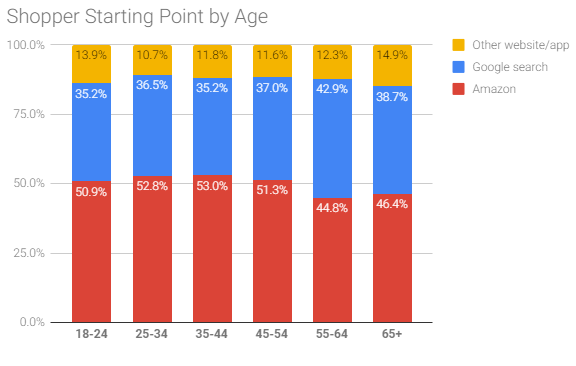 Female respondents were 6% points more likely to start at Amazon than their male counterparts, who are both more likely to use Google and other websites/apps.

Methodology: The survey was conducted using an online panel of 1,556 USA-based consumers in June 2018. Respondents were asked “You want to buy something online. Where do you start?” and given three choices in randomized order: Google, Amazon or Other Website/App. The same survey also ran last year in June, 2017.

About JollyGoodGifts.com: We are a gift recommendation website focused on helping shoppers discover unique ideas for specific personalities, professions and more.